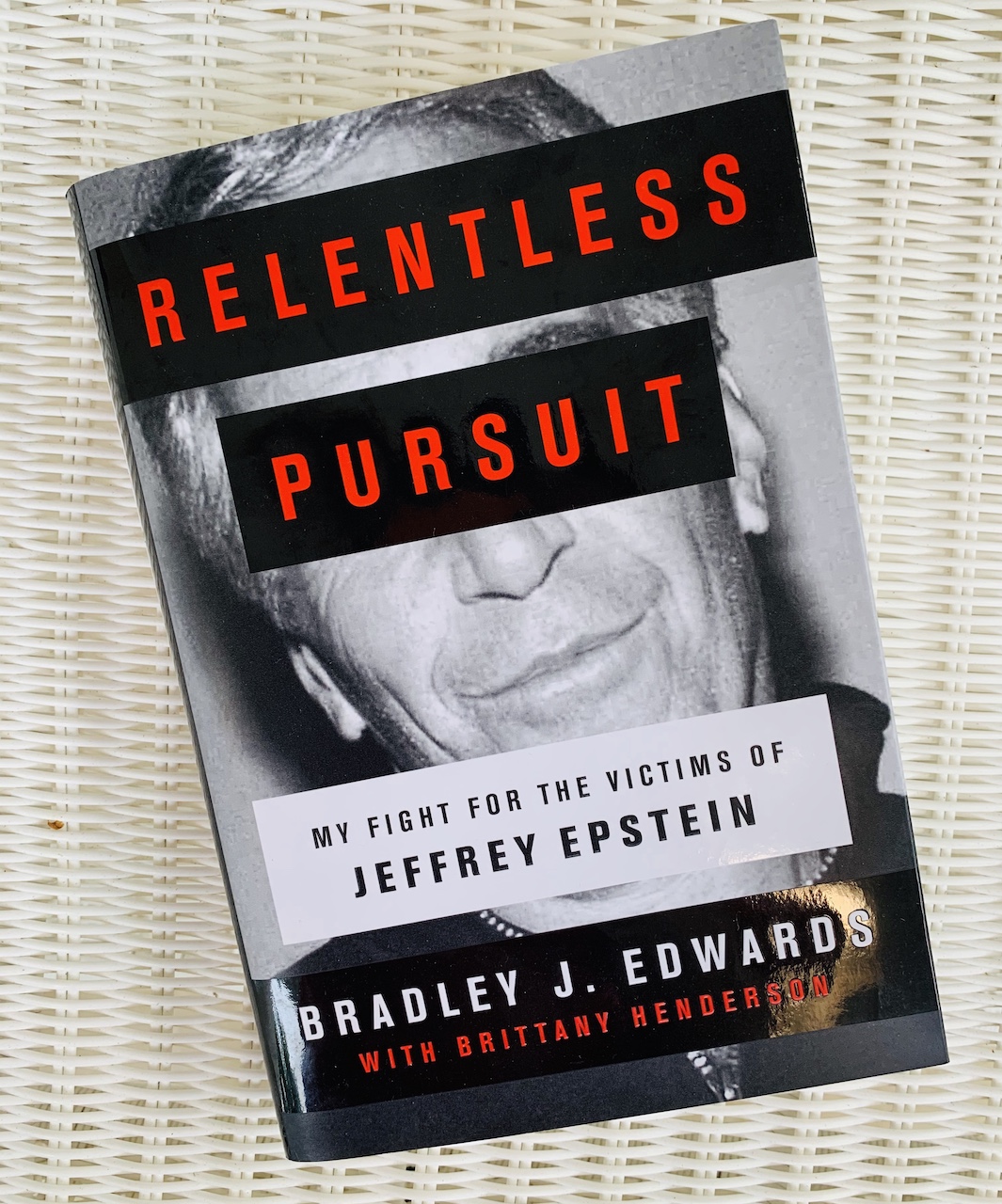 Was Jeffrey Epstein indeed killed in jail? How did Epstein get away with these heinous crimes? How did he amass his huge fortune? What will happen to Ghislaine Maxwell? If you’re anything like me, these same questions swirled through your head while following the sordid Epstein case. Luckily for you, my loyal readers, I’m college cronies (Go, Gators!) with Attorney Brad Edwards who worked tirelessly with  approximately 50 Epstein Victims (yes, you read that right) for over a decade and penned the novel Relentless Pursuit. In this thrilling page turner, Brad reveals never-heard-before details on Epstein, the Survivors’ harrowing tales and his long fight to bring this monstrous man to justice. Without further ado, here’s my exclusive Q&A with prominent trial lawyer and friend, Brad Edwards:

Contrary to popular belief, you feel convicted sex offender Jeffrey Epstein committed suicide while in prison. Why? While it is not nearly as exciting as the conspiracy theories, all evidence points to suicide. Knowing him the way I did, he was addicted to control. He had to control everything about his life and the lives of those around him, at all times. He also needed the life he was accustomed to, including his female relationships (I suppose that is the most appropriate way to say that here). When his bail was denied and he knew he would spend his life in prison, as the person now being controlled, he could not live like that. The last thing he could control was how he went out. Also, nobody other than the guards were anywhere near him when he died, and while I do believe some other prisoner would have eventually killed him (just for being the type of sicko he was), he knew that and killed himself before giving anyone else the satisfaction.

You and Epstein were mortal enemies — what is the biggest takeaway from your complex relationship with him?  There were times when, despite knowing the evil he had done, his intellect and charisma would momentarily make me forget how bad he was.  When I got closer to him personally, I appreciated just how manipulative he was and finally understood how he accumulated so many victims as well as powerful friends while at the same time being this evil monster. On the surface, he not only had this obviously genius intellect but seemed likable, philanthropic, caring and good hearted, too good to be true.  And you know what they say about anything that looks too good to be true…  Jeffrey Epstein proved that adage again.

Jeffrey is deceased. Ghislaine Maxwell sits in a New York prison as we speak. Do you feel justice has been served? No. However, if Jeffrey Epstein had his way back in 2008 when he was investigated in Florida, nobody would have known any of this and the number of victims would have been exponentially more.  And he would still be up to the same tricks.  The fact that he was jailed was the beginning of justice. The fact that he did not have to face his accusers deprived them of full justice but the result is better than him being out. The prosecutors in New York have been excellent, both in their investigation and in their treatment of the victims. So, the fact that they are still making arrests of key players, like Ghislaine, is a strong and necessary attempt to bring justice to one of the most unjust situations in American legal history.

If you could say one thing to Epstein today — what would it be?  As I detailed in the book, we had many conversations, and in one of the last times we met, he asked that I come to his home and talk about “everything.”  Who knows what that would have included in his mind, but for both of us we had many questions for the other remaining.  Once he was in jail, the question I wanted to ask him most was whether he regretted anything.  I imagine that question sparking a conversation, like most I had with him, that would meander into the law, religion, society and philosophy as he tried to dodge the actual question with thoughtful, related questions of his own.  If pinned down, it would be difficult for him to say no, considering he would be sitting in jail, but also difficult for him to say yes, given his ego and commitment to his beliefs.

What is the greatest lesson you have learned from the Epstein Survivors? As long as you are alive, you can make a positive difference in this world.  Meaning, it’s never too late.  There were times when I thought several of them were down and could end up dead or in jail.  And, yet, some of those I was most worried about have turned their lives around and now are responsible for turning the lives of thousands of others around.  I am as thankful for my clients as they are for me.  Maybe more so.

Your book shares intimate and depraved tales regarding underage girls  (some as young as 12!) and sexual abuse — what is the most shocking story a Survivor has ever told you? There have been so many shocking stories that they are tough to rank.  He abused many girls in every way imaginable, with such frequency that at some point it was no longer shocking to hear. Actually, I think the most shocking thing was that when he was serving his Florida jail sentence as a registered sex offender he was leaving jail each day to have sex.

Are you currently involved in the Maxwell trial? No comment.

Regarding the newly unsealed documents involving Maxwell — what is new news? In reality, not much. The only truly newsworthy documents that are not public somewhere are the depositions we took, only some of which have been made public.  But, the journalists covering the case seem so caught up in trying to take credit for discovering something that every time something comes out they report it as news.

Human trafficking is all too real. What is the best advice you can give a parents regarding this issue? Don’t be afraid to talk honestly with your kids, and don’t start that discussion too late.  We all want to keep our kids protected for as long as possible but empowering them with knowledge is the only way to provide them the tools necessary to protect themselves. Also, don’t fall into the trap of thinking it only happens somewhere else to someone else.  It can happen to anyone.

Describe Epstein in three words: Controlling, Charming, Conniving.  I know you didn’t say they all needed to start with “C,” but it just came out that way.

Real talk — Epstein was a billionaire with a private island, mansions,  private jet and more. How did he amass this vast fortune?  If legal theft is a thing, then that’s basically what he did.  He convinced ultra-wealthy people that he was some financial Messiah (which he was not) and they paid him. He knew that the super-rich pay less attention to their money and most are no more business savvy.  I guess it’s a pretty simple concept — conning the rich is more lucrative.

You and Epstein met regularly at Starbucks to discuss his case. Tell us something about him most people wouldn’t expect: He always drove himself. That surprised me. I always had this image of some chauffer driving him everywhere, and of course he had drivers on his payroll but when we met he drove.

Look into your crystal ball, what does the future hold for Maxwell? Bars. Not the kind you drink at.