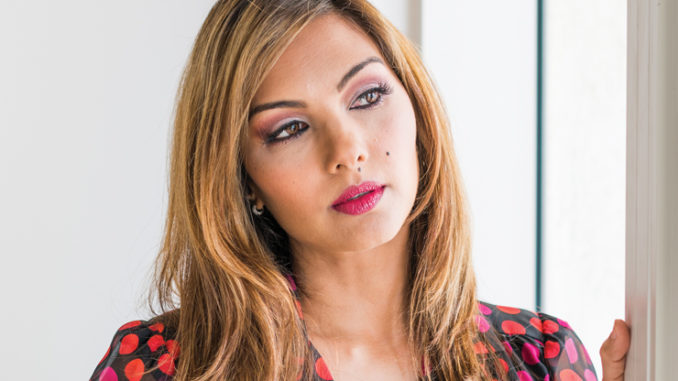 Yesterday I attended the No More Tears annual luncheon to shed light on the horrors of human trafficking. My dear friend Erin Newberg was the Event Chair and she produced an amazing event which left everyone (ironically) in tears. I asked myself during the gut-wrenching speeches from human trafficking survivors this question: Aside from donating, what can I do to help? My gut told me to sit my #blessed butt down, formulate a story and educate my community on something other than anti-aging face creams and gluten-free recipes (although I do love that too!).

Did you know that Miami Dade ranks #3 in human trafficking in the U.S.? Yes, this form of modern day slavery is happening in our own backyards. With this said, I recently interviewed No More Tears Founder Somy Ali (photographed above) on this crisis.

You see, before Somy became an activist against human trafficking and domestic violence, she was paying her dues in Mumbai, India, working as an actor in 10 Bollywood films. And while glitz and glamour are synonymous with that colorful world, Somy witnessed many injustices and violence growing up in Pakistan and during her teenage years while working as an actress in India. “Abuse has no prejudices and does not discriminate at all. It impacts all of us irrespective of affluence or where we grew up. While our house stood tall on the outside in Pakistan, there were many cracks on the inside every single day,” Somy says.

It is these darker personal experiences which inspired her to found No More Tears — a non-profit organization with a mission to assist and empower victims of human trafficking and domestic violence. Since the organization’s genesis in 2007, the organization has assisted more than 21,000 women, men, children and their pets by providing legal assistance, medical, counseling, education, jobs, driving lessons, housing, basic survival needs, and above all, a certainty that they will never be hurt again. Here, I get to know the brazen Bollywood-actress-turned-philanthropist.

You grew up in Pakistan — worlds away from your current home of Miami. How did your upbringing influence No More Tears?

I grew up in a home of severe abuse. My father was physically abusive to my mother and my brother and I were verbally and physically abused by our mother. In addition to that, I was sexually abused by the house help numerous times from the age of 5 to 11. No More Tears (NMT) was born solely due to all the abuse I encountered in many chapters of my life including rape in the U.S. at the age of 13.

How did you heal those wounds?

I do not think one can fully heal from immense amount of verbal, sexual and physical abuse. However, NMT has been a pivotal part of my healing. Getting up every single day and helping many in need is the best therapy I could have given myself. It’s one step at a time. Each day is slightly better. Of course there are days that are bad, but eventually I bounce back. Healing is a lifelong process at least for me.

Florida has been identified as a hub for human trafficking — the third highest in the country — what is a common thread we see in victims?

There are several aspects pertaining to how one falls in this trap. There is the dark web issue where children as young as age 2 are being raped and molested while people are paying money to watch this take place. We have kids or young adults that disclose to their parents about being gay or trans; the parents throw them out and they end up on the streets which is where the traffickers grab them. We have had girls and boys wanting to become stars and they are sent tickets online to come to Miami. They end up in a hotel room shot up with heroine and being raped by numerous men. We have the ‘Romeo pimp’ that plays the loving boyfriend and gives the victim anything he/she desires, then ultimately asks them to have sex with others if they truly love them. Social media plays a huge role as well in luring our youth as you never know who is on the other end. We have instances where family members are threatened to be killed if the victims do not comply with the traffickers. Some kids that age out of foster care end up on the streets then in the hands of the traffickers. Again, it’s not limited a certain kind of person and significantly impacts all whether you are affluent or otherwise, they solely look for the vulnerable. They know how to find them and are extremely cunning and manipulative.

Prior to becoming a social activist, you were a Bollywood actress and appeared in a flurry of Hindi films — what do you miss most about that world?

I miss being able to travel all over India. Some of my favorite places to visit are in India. There is truly nothing I miss about being an actor or the industry as I went there to pursue a teenage crush and somehow ended up doing 10 movies. It was not planned at all.

If you weren’t an activist or actress, what would be plan B?

Love that! What book is on your nightstand right now?

The Slave Across the Street — The True Story of How an American Teen Survived the World of Human Trafficking by Theresa Flores.

It’s pouring outside and I’m curled up in bed watching movies all day while ordering Uber eats.

What is your favorite TV show of all time?

What app do you find yourself spending far too much time on?

I am a news junkie so for me it would have to be all the news apps.

What is the best piece of advice you would give your 19-year-old self?

None of this is your fault and things will get better soon. Have patience and believe in yourself. You will become a victor from a victim very soon.

Get involved and browse on over to here for more information on Somy Ali’s non-profit organization: https://nomoretearsusa.org/